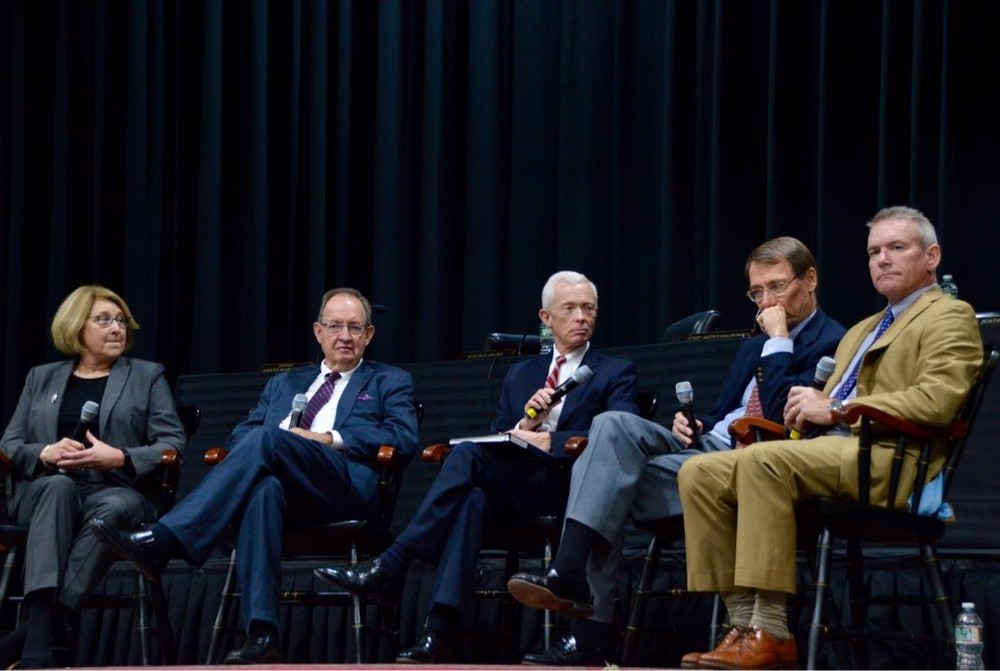 On the Road with the New Hampshire Supreme Court

The New Hampshire Supreme Court established its “On the Road'' program in May 2002. Through this program, the New Hampshire Supreme Court travels to high schools and colleges throughout the state. These visits provide students, teachers, and communities with extended learning opportunities to see our state's highest court in action. “We five Justices who try to travel to a school each fall,” says Associate Justice James Bassett. This is the first time the program has run since the Covid-19 pandemic and is the twentieth year of the event.  A handful of prestigious schools have previously hosted the Court, including Dartmouth College, Bishop Guertin High School, Phillips Exeter Academy, and Winnacunnet High School.  Each year just one school is selected for this honor and this year it was our very own White Mountains Regional High School.

Before entering the auditorium to hear a court case, the five justices met with a small group of White Mountains Regional High School reporting staff and were given the opportunity to converse with the justices prior to the presentation of the case; between sips of coffee and Judge Hicks reminiscing about the YMCA,  each justice gave a rundown on their careers before becoming justices, their education, and their experiences on the bench

Chief Justice Gordon MacDonald grew up in Hanover, New Hampshire. He attended public schools all throughout elementary and high school; MacDonald later graduated from Dartmouth College with a degree in Government and earned his Juris Doctor from Cornell Law. Before beginning his service as Chief Justice in 2021, MacDonald worked as a law clerk for a federal judge, was the Attorney General of NH from 2017 to 2021, worked in private practice in Manchester, and spent eight years working on Capitol Hill.

Senior Associate Gary Hicks grew up in Colebrook, New Hampshire. He received a degree in mathematics from Bucknell University and a degree from Boston University School of Law.  Hicks then served four years on the Superior Court, the state's major trial court, as well as a commercial litigator for 23 years. Later on Hicks was sworn into the Court in 2006 and has been serving for 17 years.

Associate Justice James Bassett grew up in Connecticut,  graduating from Dartmouth College and the University of Virginia Law School. Before sitting as an Associate Justice. Bassett spent 27 years working as a trial and appellate attorney.  Bassett was nominated to serve on the Supreme Court by Governor John Lynch and has been a member of the high Court since 2012.

Associate Justice Anna Barbra Hantz Marconi grew up in Virginia.  She earned a Bachelor’s Degree in Political Science from the University of New Hampshire and her Juris Doctor from the Chicago Kent College of Law. Prior to becoming a Justice,  Hantz Marconi worked at a school for the deaf, on political campaigns, and in real estate before making her way back to law.  Hantz Marconi has worked on family law, zoning, and land use. She has experience on New Hampshire’s Executive Council, in private practice, and as a clerk for the Maine Supreme Court. She was sworn in by Governor Chris Sununu in 2017.  Hantz Marconi is only the third woman to sit on the state's highest court.

Looking at the Court from the inside

On the whole, the five justices agreed that a handful of key skills needed to be a Supreme Court Justice are the abilities to listen, compromise, be open-minded, and think in the present while considering the future.  The five Justices also agreed that a person needs to be able to shut off the side of them that contains opinion and emotion and focus on the fact and law procedure being presented to be a judge.  Chief Justice Gordon MacDonald said, “Our job is to follow the law.  Policy judgments may or may not be agreed with but our job isn't to agree, it's to follow the law.”

Justice Hantz Marconi offered “the work of trial court is to streamline the process and make uniform across courts”.

“A lot of what we try to do is clarify and uniform,” says Justice Bassett.

Chief Justice MacDonald also stated, a large part of their job is to make sure every court in the state has the resources they need and to make sure they are best serving the courts throughout the states.

New Hampshire has 42 judges and they have to see about 130,000 cases per year. There is a severe need for more resources to best serve New Hampshire's legal system.

White Mountains students asked intelligent, well-thought-out questions to the attorneys and justices following the presentation, inquiring about their daily duties, how they got to their position on the Supreme Court, and how they deal with cases they may not morally agree with.